Correspondence from the Way on April 30, 2016. Le Puy du Velay (Via Podiensis) to Santiago. Reprinted from Pinewood News.

Today I saw a beautiful young Italian woman laughing at the weather with snowflakes clinging to her dark eyelashes. The flakes were large and falling slowly until the intermittent wind drove them fast into our faces. It’s the last day of April near Le Puy, France, and I didn’t expect snow.

Everytime I’ve brought lightweight gloves to France or Spain to walk one of the ancient pilgrimage routes known best in the US as the Camino de Santiago, I haven’t needed them, so I left them behind. Today I would have loved to have a pair. I kept  telling myself that I really couldn’t get frostbite in 20F-degree weather, but it still didn’t help my numbing fingers.

Today I also saw hundreds of yellow daffodils decorating a carpet of grass through which a small, meandering stream flowed. I’d never seen daffodils, called jonquils here in France, in the wild before and the contrast  between the yellow and the green stopped me in my tracks. That was before the snow started on Les Chemins de St Jacques. 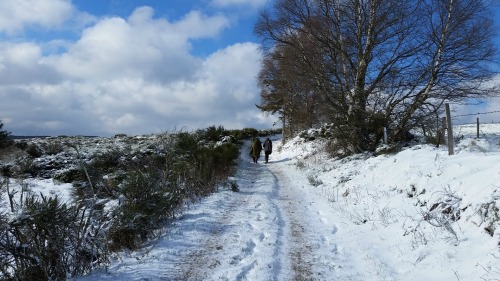 Later, after the falling snow subsided for awhile, I saw four men in the forest standing, talking and laughing next to a gate in our pathway. It seemed a good spot to stop and talk to the pilgrims who were catching up with us from behind, what with another field of jonquils within sight, this time with their cheery faces turned down towards a bed of snow. Evidently this place had inspired others before us, because scrawled across an otherwise wordless yield sign nearby were the words, “I love mi lyfe.”

“Would you like a banana?” Pierre offered to each of the other three men and me. It was an awefully big bunch of very long bananas — too much for one man to be carrying in his backpack. “Please, have a banana,” he offered again after each of us had politely declined.

“Well, if we can help you out,” Joseph, the Belgian laughed. Each pilgrim took one and in unison peeled their bananas and took a bite.
“I have to take a picture of this,” I said taking my camera out. They all hammed it up for me and I thought, “What a beautiful and healthful Camino family I have found here in France. If I were taking this photo in Spain, the guys would be lifting their beers, not their bananas.”

Later at lunch, Joseph showed me a wooden, hand-carved shell the size of a small snail. The scallop shell, the symbol of St James, held a special story for Joseph. “Yesterday, it was hot and I wanted something to drink, and I saw a sign that read ‘NENE.’ After walking to the sign, I saw a man whose clothes were so dirty. He needed a haircut. Normally I would not stop and speak to such a man. But I wanted something to drink.”

“He sat at a table on the road. On the same table that he had a red wine bottle, glass half drunk, bread, cheese, he also collected machine parts, old oil cans, petrol cans and rusty tools. The table was dark and dirty and behind it, he sat in a wheelchair.”

“But the guy was so happy that in a few moments we were exchanging about our families and lives. I spent 20 minutes with the man. He told me that he had a job to install high electric cable all over the world. But then he had an accident and fell.

“When I finally walked away, within 200 yards of leaving his place I had tears in my eyes. ‘Joseph, do you now understand why you are walking Compostela?’ I heard. This guy opened my eyes. I was wondering why I was on this way. It (the reason) is for exchanging with others. I’m not only walking the Camino for myself but for the community that I find here. I am part of what is making this man’s happiness and he is part of mine.”